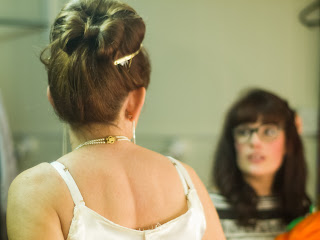 Pantomime! On one hand you have the flamboyant hilarity of the Dames and on the other, the glamour of our one and only fairy godmother. Can I firstly say the Fairy godmother was just like her character, kind, glam and super glittery... by the time I was done with her! As a woman her make-up skills were, lets just say, better then the boys. This took me back to my basics… hair. 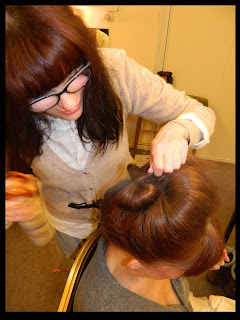 I wanted to create a classic look with a cute and quirky twist. To get that pantomime style glamour I immediately went for the biggest beehive I could get in the time I had. However it must be noted, that with flying around the stage and pulling a hood off her head throughout the play, this became too inconvenient for the actress and adjustments had to be made. The beehive became smaller and more suitable for the stage antics. 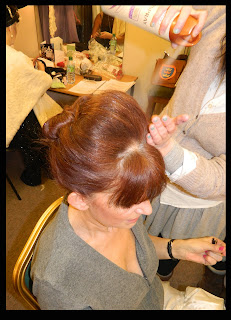 It is important to mention that when thespians express concern with hair and make-up they must be listened to. After all they are your clients and they have to be comfortable in the look you’ve given them or they’re not going to be able to give their best performance. You don’t want that on your head when the director’s pointing fingers at the intermission. 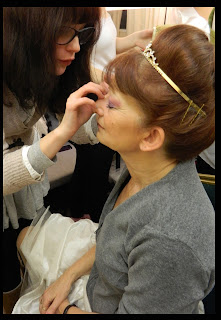 At the back of the beehive I wanted to do something different to the conventional bun or vertical roll. I opted for a cute hair bow.  As the Godmothers young apprentice sported a ballet style bun I thought a bow would be the perfect contrast. I felt if I used a vertical roll it would age the Godmother, (and our Godmother was certainly not giving up that youthful zest.) 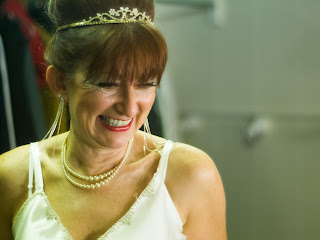 The bow kept the look fresh and young, giving the audience a nice surprise when she span round casting her good thoughts. I simply finished of by applying hairspray, tiara, eyelashes (quickly) and lots and lots of glitter!! So there you have it, sparkle my fairy godmothers, sparkle.