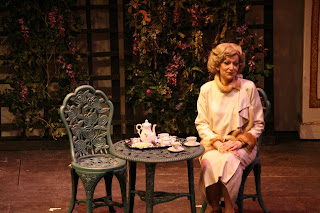 I loved doing the make-up for Elsa because it was so subtly different to all the other girls make up. It gave me the chance to steer away from the natural dewy look and get creative with seriously smokey eyes and contouring. Elsa is a glamour gal and her make-up had to reflect the fashion of the time, along side her wealth and style.
After applying foundation two shades darker than the natural skin tone, I went on to do some major contouring around the cheek bones and forehead area. A blonder (and rather draining) wig had to be placed at the end so I took the bronzer quite low on to the forehead area to add as much colour and depth to the face as possible. 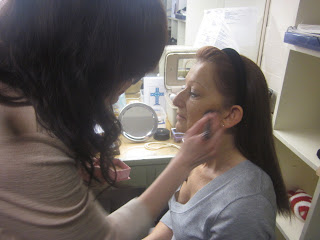 The 50 shades of grey smokey eye I created truly captured the late 1930's era with the classic blues gradually getting deeper into the grey and even blacks.
Much of this look was created using Urban Decays 'Naked' palette,  retailing at £36. 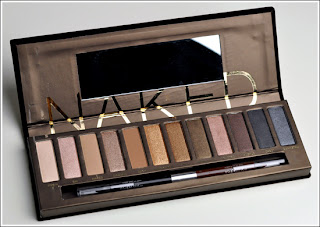 Light blue was added along the lid of the eye to begin. As the eye I was working on was hooded, the brightness of the blue would pull the lid to the front making the eye look more open. A medium blue was then added above and through the eye to create a base for the rest of the deeper eye makeup. 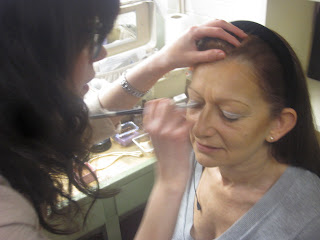 The next step was to take the grey Gunmetal from the Naked palette and place it in the out corner of the lid. Once enough product was applied it was then blended through to the centre of the top of the lid. this created a shadow that made the hood of the eye disappear. 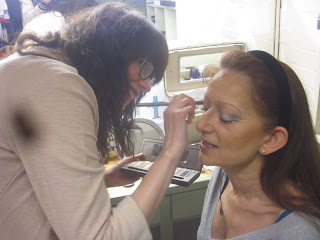 To deepen the corners of the eye, a small amount of Creep black from the Naked palette was applied to the outer corner and blended slightly. If this look was recreated for a real life scenario I would probably skip this step as it is mainly for the audiences benefit. 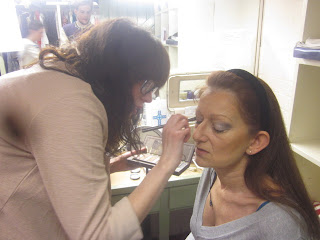 A fine line of Virgin white from the Naked palette as used to highlight the brow bone. 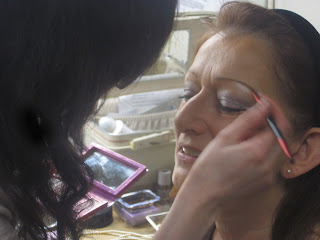 Going back to Creep, the top and bottom lash lines were shaded to create the effect of thicker lashes. 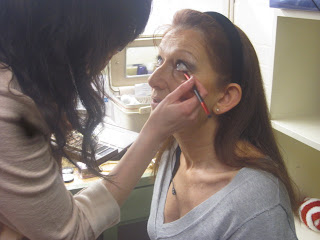 False lashes were then added. I must take a moment to express how much false lashes are a benefit to theatre actresses. With all the existing make-up it's so much easier (and if applied properly less irritating) then mascara. False eyelashes are quickly removed with a cotton bud of moisturiser (or a good cry) as opposed to the constant rubbing and wiping of make-up remover to get mascara out of those lashes. 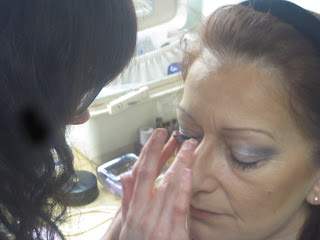 Once those brows were thickened up, I was then able to go on to the blusher and lips. I used coral instead of a deep red as Elsa is a lady and would go for elegance over brashness. It was also important to consider that the patriotic reds weren't the height of fashion until 1940 and The Sound Of Music was set in 1938.
I applied the coral blush just above the contour line and took it slightly down towards the jaw. It was important to keep the blush off the apples of her cheeks as this technique is actually used in film to make a character look older (and thats the last thing you want to do to an actress). 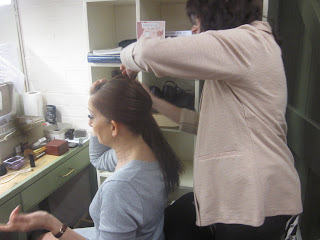